July 2006 - - The Los Angeles and Long Beach ports have been in competition with each other for decades, to the extent that it has been a significant constraint to cooperating on air pollution solutions at both ports. It appears that the ports are cooperating now, though, due to area resistance to growth and Los Angeles Mayor Antonio Villaraigosa’s leadership. Now the ports are planning to reduce pollution from trains, ships, and trucks that use the port by more than 50% by requiring ships that use either the Long Beach or Los Angeles port to use cleaner fuels and electricity rather than diesel when tied up. In exchange for conforming to this requirement the two ports promise expansions that will allow shippers to increase their business in the region and increase longshoreman jobs in California. The International Longshore and Warehouse Union supports the proposal.

he Los Angeles port is the nation's largest and includes 43 miles of waterfront, features 26 massive cargo terminals. It handled almost 8 million containers in 2005. A token stretch of land from L.A. to the port is used to justify calling it the Los Angeles Port. It is really in Long Beach. Long Beach covers 3,200 acres, shipped almost 7 million containers in 2005 and is responsible for close to 10% of the jobs in the city. Together, the ports generate more than 500,000 Southern California jobs, including longshoreman jobs in California, but a single tanker produces as much air pollution as 12,000 cars. Los Angeles operates the nation's largest port, with Long Beach second. Taken together, the side-by-side shipping centers rank as the world's fifth-busiest complex behind Singapore, Hong Kong, Shanghai and Shenzhen, China.

Mayor Villaraigosa's has also selected S. David Freeman, formerly the head of the Los Angeles Department of Water and Power and a fervent environmentalist, to lead Los Angeles' Board of Harbor Commissioners.

Maersk, Inc, the largest shipping company in the world and the largest container terminal operator at the Los Angeles Port, has announced that its vessels using the ports would begin burning cleaner fuel. Maersk's decision broke from the rest of the industry, which opposes the proposal. The cleaner fuels produce 90% less sulfur oxide and 73% less particulate matter than the diesel fuel they are replacing.

After tourism, trade-related transportation from the Los Angeles / 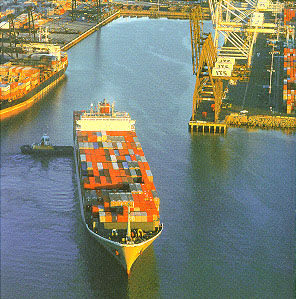 After tourism, trade-related transportation from the Los Angeles / Long Beach port complex is the No. 2 source of jobs in greater Los Angeles (L.A., Riverside, San Bernardino and Ventura counties). According to the California Employment Development Department ( EDD ), 800,000 people in Los Angeles County and 230,000 in the Riverside-San Bernardino County area are employed by the trade/transportation sector. Approximately 100,000 port-related jobs are part of the wholesale distribution category: workers loading, unloading and moving product at storage facilities and truckers driving goods from warehouses to retailers. About 40,000 are longshoreman jobs in California. Longshoremen are responsible for loading and unloading ships and truckers who drive the unloaded cargo from the ships to warehouses in Southern California. Approximately 11,000 workers process crude coming in at Long Beach. 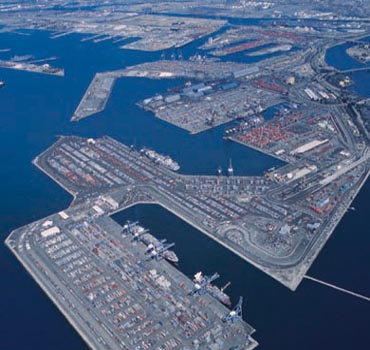 The port complex handles about a third of all U.S. container products, about $200 billion worth of cargo a year. Although the port will triple its growth in the next 20 years, high off-hours labor costs, anti-truck traffic and anti-highway NIMBY communities and clean air requirements all work against efficient global trade coming into Southern California. 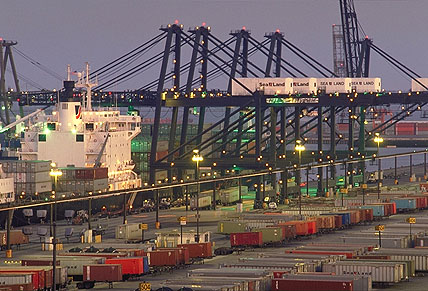 If highway 710 and other transportation infrastructure aren't expanded over the next decade Southern California will lose trade to other U.S. ports. Losses were estimated at $2 billion per day during the 2002 port strike by the International Lonshore and Warehouse Union . Contacts: Los Angeles County Economic Development Corp ( LAEDC ), Southern California Association of Governments ( SCAG ), Metropolitan Transit Authority ( MTA ), and the Gateway Cities Council of Governments ( GCCG ).

In an age of terrorism, a security zone has been established around the port complex.  Security zone regulations cover every aspect of port operations that could pose a security risk.