Does it matter that the catastrophe facing New Orleans includes the fact that the city's majority population was 67 percent African American. Probably not. But the delay in providing food and water to blacks stranded at the Superdome and the highway overpass gave the impression that the American power structure for managing catastrophes was ignoring them because they were black. Come to find out, it was Louisiana Governor Blanco's refusal to authorize the federal government to take control that delayed the response of the federal government in providing food, water, security and evacuation to poor stranded blacks at the Superdome and at the Convention Center in New Orleans in the first days after the Hurricane Katrina crisis.

Hurricane Katrina is the most devastating weather event in the history of the country. It has turned a city with a rich cultural history and a top tourist attraction into a vast cesspool contaminated with toxic chemicals and human waste. Experts have warned for years that the levees and pumps that usually keep New Orleans dry have no chance against a Category 5 storm. Katrina reached Category 5 level Sunday before weakening just slightly to a strong Category 4 storm early Monday. But with top winds of 150 mph and the power to lift sea level by as much as 28 feet above normal, the storm threatened an environmental disaster of biblical proportions, one that would leave more than 1 million people homeless.

There is now a question as to whether the poorest and blackest part of black New Orleans, the Lower Ninth Ward, should be rebuilt to accomodate poor blacks. The ward of about 20,000 people with more than one-third of residents living below the poverty line, according to the 2000 Census, was destroyed 40 years ago by Hurricane Betsy and was rebuilt to house poor blacks. The ward was composed of maids, bellhops, busboys, retirees, carpenters, sculptors, musicians and other blue collar workers. Approximately half of the houses were rentals. The clean up of the toxic area will be very expensive. Levee protection will also be expensive. Will such expensive remediation and mitigation lead to the construction of low-income or high-income housing? Many other environmental and economic issues will also influence redevelopment along the entire Gulf Coast.

The U.S. Environmental Protection Agency (EPA) has given a fuel air standards waiver to Alabama, Florida, Louisiana, and Mississippi, which will allow fuel suppliers to sell gasoline that has a higher Reid Vapor Pressure and diesel that has higher sulfur content than normally allowed. The waiver will allow refiners to supply gasoline meeting a Reid Vapor Pressure standard of 9.0 and diesel with sulfur content higher than 500 parts per million until Sept. 15, 2005

Although it is still being debated, some believe the heightened activity and growing intensity of hurricanes are due to global warming. The theory is that global warming is causing ocean temperatures to rise and is causing more hurricanes during hurricane season. Warm water temperature fuels hurricanes. A recent paper published in the journal Nature by meteorologist Kerry Emanuel of the Massachusetts Institute of Technology concluded that the destructive power of hurricanes had increased 50% over the last half a century, and that a rise in surface temperatures linked to global warming was at least partly responsible. According to the National Oceanic and Atmospheric Administration (NOAA), hurricane activity in the Atlantic has been higher than normal in nine of the last 11 years. NOAA is forecasting as many as 11 hurricanes and five to seven that would reach major-hurricane status for 2005, which could make 2005 one of the most violent hurricane seasons ever recorded. A typical storm year in the Atlantic results in six hurricanes

Gasoline prices nationwide were rising before Hurricane Katrina due to tight supplies worldwide. Wholesale gasoline prices soared above $3 a gallon in the Gulf Coast region. The national average pump price is around $2.60 a gallon. Katrina shut down nine refineries, closed major fuel pipelines and cut nearly all offshore oil production. Prices will probably continue to rise in the coming months before dropping back to normal levels.

After the hurricane passed, the breaks in the levees and sea walls made 80 percent of New Orleans uninhabitable. The breaks on Tuesday after the Monday storm exacerbated evacuation and rescue efforts. It also ran thousands of people out of their homes and will ultimately be responsible for most of the deaths in New Orlenas.

For Information on Volunteering:

To Donate Goods or Services: 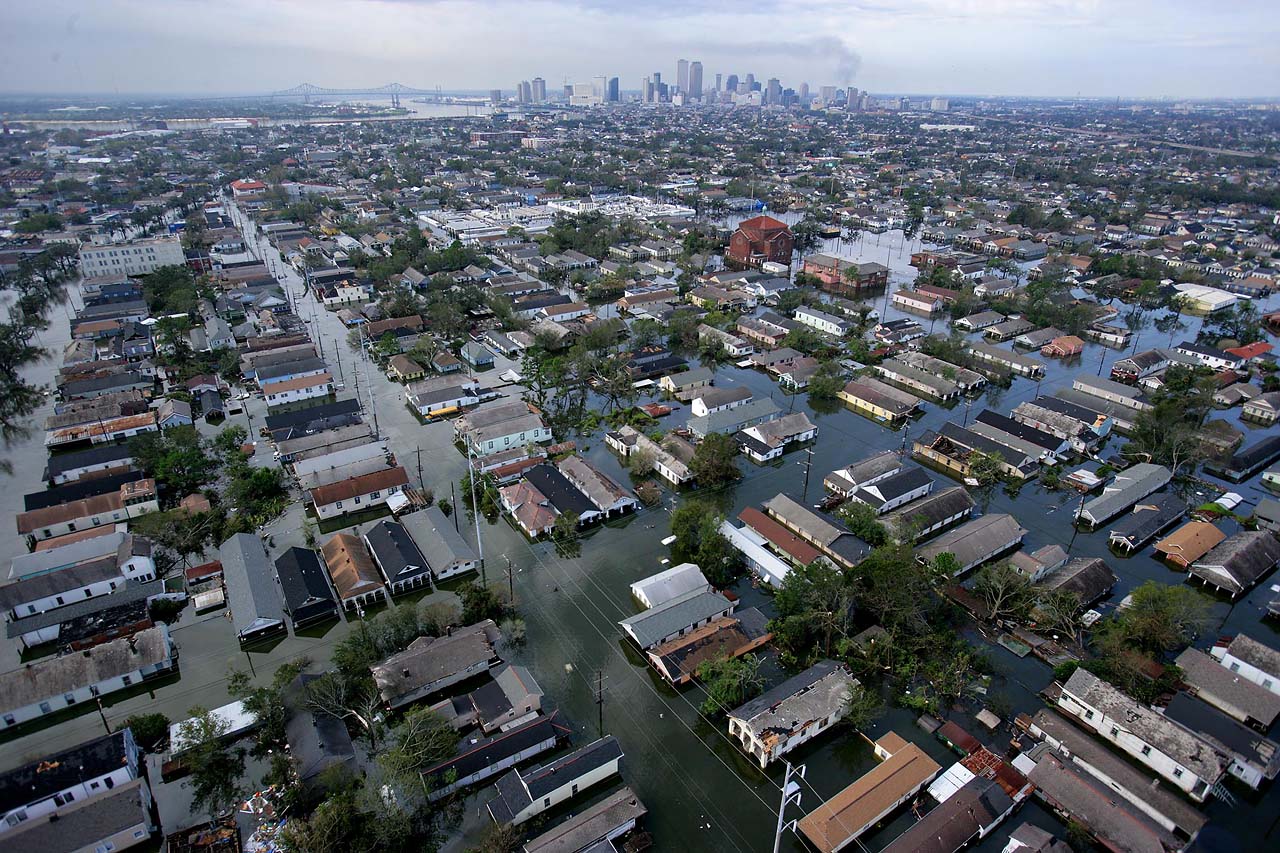 Office of the Press Secretary

Federal Relief For The Victims Of Hurricane Katrina

The President Is Directing Federal Agencies Throughout The Government To Do All In Their Power To Assist The Victims Of Hurricane Katrina.  The top priority is to save and sustain lives.  Today, President Bush convened a Cabinet-level task force on Hurricane Katrina response and recovery.  Residents of the Gulf Coast states affected by the hurricane have lost loved ones, lost homes, and been displaced from their communities, and they will have the full support of the Federal government.

ÃThe President Has Given The Department Of Homeland Security (DHS) Authority To Coordinate The Response.  The President announced that Secretary of Homeland Security Michael Chertoff will chair the interagency task force while Michael Brown, DHS Undersecretary for Emergency Preparedness and Response, is serving as the Administration’s lead on the ground.

ÃThe President Has Called For The Coordination Of All Parties Involved In The Response And Relief Efforts. Federal, state, and local governments are working side-by-side to deliver relief to the areas physically damaged by Hurricane Katrina and to communities across the South that will be affected in the aftermath of the storm.  Efforts and resources are focused on saving lives, sustaining lives, and supporting long-term recovery.

ÃThe President Has Called On All Americans To Support The Relief And Rescue Efforts Through Charitable Contributions And Aid.  Americans who wish to contribute can do so by contacting charities that are assisting with hurricane relief.  For example, citizens can call the Red Cross at 1-800-HELP-NOW (1-800-435-7669) or make an online contribution to the Disaster Relief Fund at www.redcross.org.

ÃOn Tuesday, Secretary Of Homeland Security Michael Chertoff Activated The National Response Plan To Ensure That Help Gets To Those Most In Need.  The National Response Plan (NRP) fully mobilizes the resources of the entire federal government to support response and recovery efforts for state and local authorities – particularly in the event of a catastrophic incident.  Secretary Chertoff has declared the devastation caused by Hurricane Katrina an incident of national significance – the first-ever use of this designation.

ÃThe Federal Government Is Working To Help Relocate Those Displaced By The Hurricane.  Those in New Orleans who were taking shelter in the Superdome are being moved to the Astrodome in Houston, and FEMA is working to provide tents and shelter.  In addition, the Departments of Housing and Urban Development, Agriculture, and Health and Human Services (HHS) are working with local communities to provide help to those who have been displaced from their homes.

ÃThis Morning, Energy Secretary Samuel Bodman Announced That The Strategic Petroleum Reserve Will Be Used To Help Fulfill Demand For Oil.  Refineries that are short on supplies of crude oil will have access to supplies from the Strategic Petroleum Reserve to help avert a disruption in the supply of gasoline to drivers and businesses across the country.

ÃEPA Has Issued Fuel Waivers To Expedite Relief and Recovery.  EPA has issued temporary waivers to make additional supplies of gasoline and diesel fuel available in those areas of the country with shortages of specific fuel blends required under the Clean Air Act.

ÃThe Department Of Defense Is Moving Military Resources Into The Gulf States To Aid In Rescue And Recovery.  Eight Navy ships have moved into the area with water, food, medicine, hospital facilities, berthing, and more.  DOD has responded to all FEMA requests and is providing logistical help, including helicopters, activation of air stations in strategic areas, and strategic lift support.

ÃThe United States Coast Guard Is Conducting Search And Rescue.  The Coast Guard has rescued and assisted thousands of people in the affected areas, and its efforts will continue until all those at risk are safe.